How to make the best moist flavoursome Ham

Ham is a traditional feasting food as well as being popular on toasties and sandwiches. It is a modern version of the traditional wild boar, part of the Scandinavian Yule celebrations, where a pig was sacrificed to Freyr the god of the Sun. It was also common at special feasts in Roman times.

Ham is available in many forms such as fresh ham, smoked leg ham, prosciutto, bacon, jamon, bayonne, gammon and even canned Spam.

Ham is generally the hind leg of a hog or pig, that has been preserved by wet or dry curing, with or without smoking, cooked or air-dried, bone-in or bone-out. It can also be made from the shoulder, the loin and the neck.

This recipe uses a Gammon. Gammon is pork that has been cured by dry salting or brining. Unlike most supermarket hams, it is not cooked and it is raw. It may or maybe not smoked – but must be treated like fresh pork and does require cooking.

You can ask your local butcher to prepare you a small gammon. The one in this recipe is supplied by Hummerston Gourmet Meats of Lane Cove (Sydney) and is a Boneless Pork Shoulder, with the skin on, netted to hold it all together after boning, and then cured using their spiced salt mixture for 4 days.

It is actually quite easy to cure the meat at home if you want to be really adventurous. Buy a good quality cut of pork and follow this procedure, taken from Misty Gully (mistygully.com.au) who can also supply all the necessary ingredients… 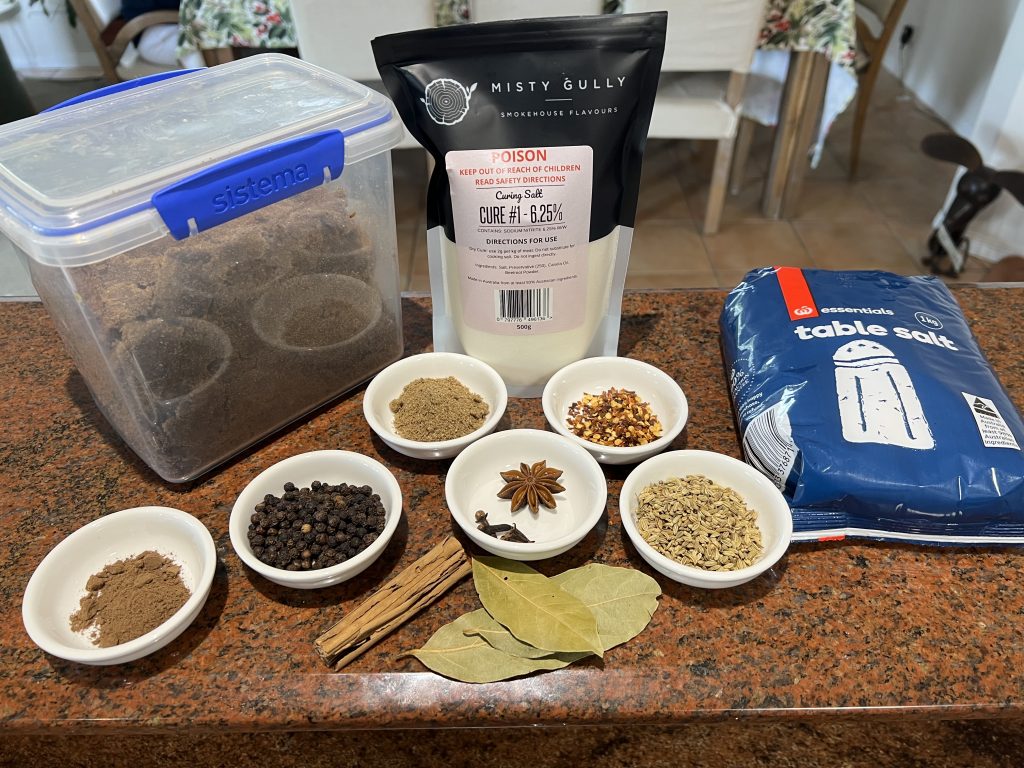 Curing a cut of pork to make your own home-made ham is a lot easier than many people think. The most popular meat to use is pork, shoulder (picnic ham) or hind leg (leg of ham), but you can make a ham out of just about any piece of meat from almost any animal. Ham can be made with the bone in or out. Basically, you need to pump the ham with a certain percentage of brine (usually around 25% of its weight as per your recipe). Pump/inject in areas close to the bone and 75mm (3 inches) from the surface.

You then need to submerge your ham in the brine and leave in the fridge for 4-10 days, depending on the size of your ham and how salty you would like the finished product to be.

After it’s cured, you will need to rinse it, then bring it up to an internal temperature of 65C in either an oven or a smoker. Obviously, a smoker is ideal as the flavour of smoked ham is impossible to beat!

Now – we are ready to make our Spiced Ham. This will take about 5½  to 6 hours 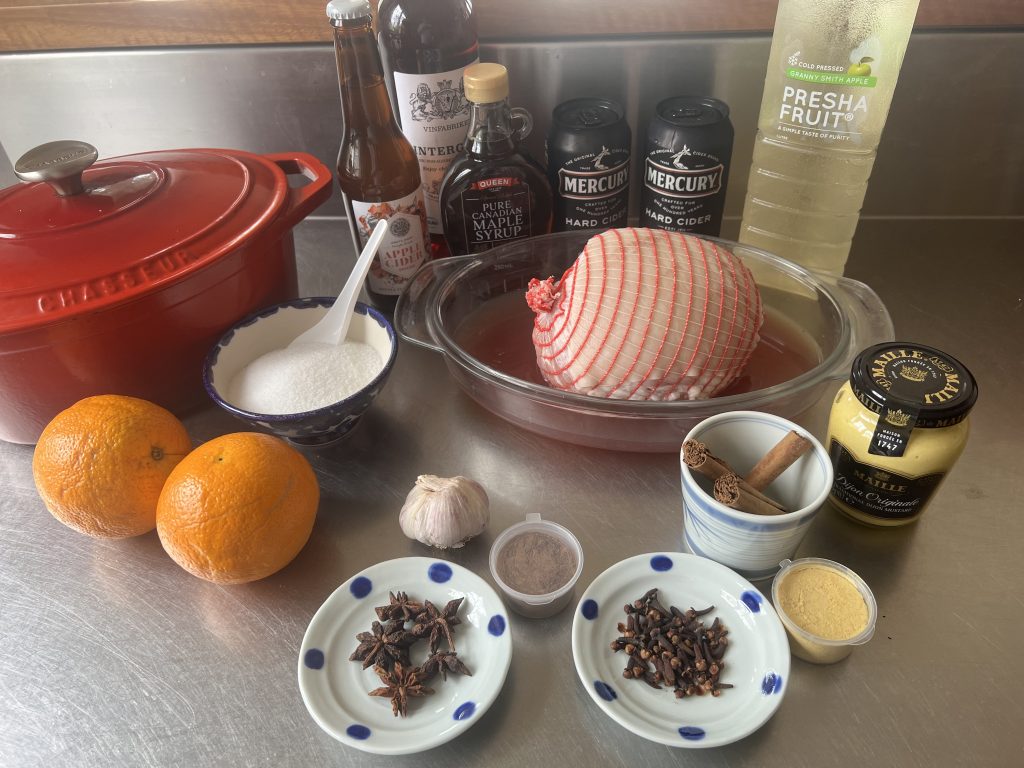 First of all, we need some Spiced Mulled Cider. “Mulled” just means infused and heated with spices – somewhat like tea. And cider is a traditional alternative to beer in England made from apples. Spiced cider can be purchased but it’s also very easy to make. As above, you will need some cider – I prefer a dry cloudy cider – some cloves, star anise, cinnamon, all spice and an orange, as well as sugar to taste.

Place all of these ingredients, except the sugar, into a saucepan and heat. Bring to a gentle simmer for 5-10 minutes – adjust the sweetness with a little sugar if necessary. We’ll need this for the gammon and for the sauce – and it’s also good as a warming Christmas drink – make extra!

Part Three: How to Cook Gammon (5 minutes plus 4.5hours to cook)

Now we are ready to cook our gammon.

Place the prepared gammon and all the other ingredients – that’s the cinnamon, garlic cloves, star anise and orange zest – together with the apple juice and mulled cider – into a large casserole on the stove. Top with water to cover the gammon. Cover with a lid and bring this to a slow simmer …. and then simply place in an oven at 120°C to slow cook for 4-4.5 hours. 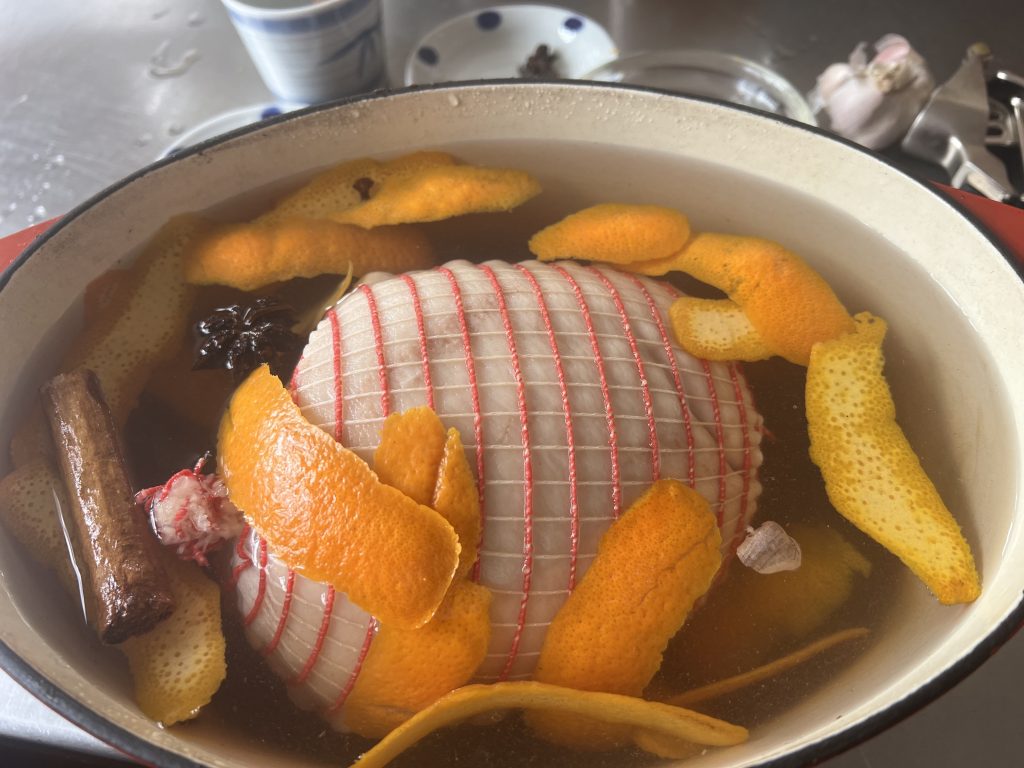 Meanwhile, whilst this is cooking, we can make the make the maple mustard glaze which we will need later on.

Heat the maple syrup in a saucepan to about 140°C – this will take about 10 minutes. Carefully add the cider – it will “spit and froth” –  and the mustard spices. Allow to simmer until reduced by half –  remove the cinnamon and blend with a stick blender.

After about 4 hours, pull the casserole out of the oven and allow the ham to stand in the juices, for half an hour, to cool and steep. Check that the internal temperature is above 65°C. Continue cooking if not.

Remove gammon from casserole. Discard the juices. Place ham on a board, and with a sharp knife, remove the skin and then score the fat. Place the ham on baking tray and brush with the maple mustard glaze.  Bake in a very hot oven (240°C) for 10 minutes. Apply a second layer of glaze – and bake for another 10 minutes.

Remove from the oven and allow to rest for 10 minutes.

Slice and serve hot/warm with the remaining glaze as a sauce.