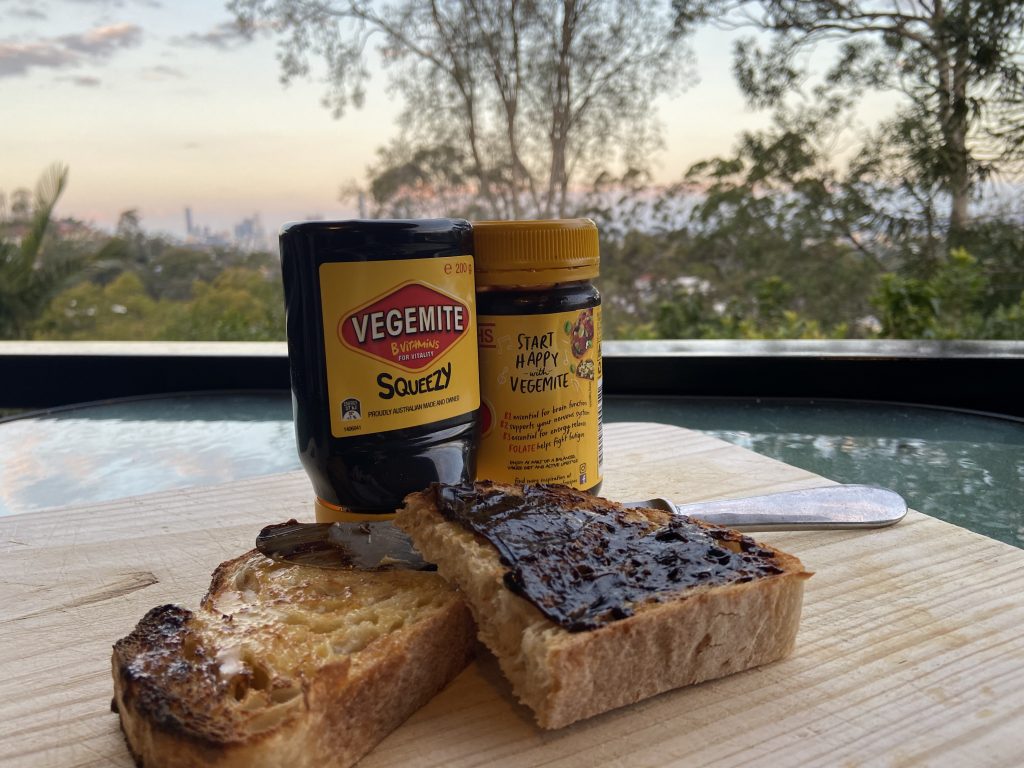 There is nothing more Australian than Vegemite.

Vegemite is a yeast extract. There are many different yeast extracts – but Vegemite is unique to Australia. And generally, it is only liked by Australian’s – although I am told that Tom Hanks is a fan.

Vegemite is a thick, dark brown spread made from left over brewer’s yeast. It is the by-product of making beer. How Australian is that??

Yeast extract consists of the contents of broken yeast cells. The process to make yeast extract was invented in the 19th century by a German agricultural scientist called Justus von Liebig. The yeast cells are heated until they rupture, and then the cells’ own digestive enzymes break down their proteins, into simpler compounds in a process, called autolysis.

Yeast autolysates are used in Dick Smith’s Aussie Mite, in Mightymite, Marmite, Promite and many other food flavourings. They are often used to create savory flavours and umami taste sensations. They are rich in B Vitamins and so, are of particular importance to vegans and vegetarians.

Vegemite is salty, slightly bitter, malty and rich in glutamic acid, an amino acid which adds the desirable umami flavour similar to beef stock. Glutamic acid, often in the form of MSG, is found in meat, cheese, fungi (mushrooms), and vegetables—such as broccoli, and tomatoes. Vegemite is vegan, kosher and halal – so suitable for all Australians.

Vegemite was invented by Cyril Callister in 1992. Callister used autolysis to break down the yeast cells from waste obtained from Carlton United Breweries – who still supply the base material. He concentrated it and blended it with salt, celery and onion extracts to form a sticky black paste.

The paste was originally called Vegemite but due to competition from Marmite it was renamed in 1928, to “Parwill” – a play on words – that is  “ma might” but “pa will”. The original name Vegemite was restored in 1935.

Vegemite’s rise to popularity was helped by its high B vitamin content and by the marketing campaigns written by J. Walter Thompson Advertising that began in 1954, using groups of smiling, healthy children singing a catchy jingle titled “We’re happy little Vegemites”.

As bright as bright can be.

We all enjoy our Vegemite

For breakfast, lunch, and tea.

Because we love our Vegemite

We all adore our Vegemite

It puts a rose in every cheek.

This first aired on radio in 1954, and the jingle was transferred to television in 1956.

Vegemite has had a number of owners but is now produced by Bega Cheese in Melbourne – an Australian Company – who make more than 22 million jars every year. Vegemite is now available in squeeze packs, so you don’t get the butter into the jar! It has also been made into a chocolate bar by Cadbury in 2015, and has been used to flavour Smith’s Crisps, bagel crisps, sausages and meat pies.

As an aside – did you know that in April 1984, a 115-gram  jar of Vegemite became the first product in Australia to be electronically scanned at a supermarket checkout?

Now how do you like your vegemite? Whilst it is a bit salty and has a strong flavour, I like it spread thick on toast – it also goes well with cheese, lettuce and tomato, and on Hot Cross Buns.